This page remembers some of the people, places and events that have contributed to the history of village life over the years. If you have any suggestions or additional material that you would like to be considered for inclusion here please let us know:

After a lifetime of generous service to the Parish Council and the community of Hemingford Grey, Derek passed away in March of 2020 while the nation was in lockdown at the beginning of the coronavirus outbreak. Restrictions rendered normal protocols and ceremonies impossible but the people of Hemingford gathered along the funeral route in the village to say goodbye.

Derek Clifton, of Hemingford Grey, passed away peacefully with his family by his side on Thursday March 26th 2020, aged 85 years. Dearly loved husband of Cynthia, much loved Dad of Cheryl and the late David, loving Grandad of Jamie, Andrew, David, Emma and Adam, and Great-Grandad of Isla. Private family internment. A memorial service will be held at a later date. Donations, if desired, made payable to NWA, NHS, FT, Hinchingbrooke Hospital (Woodland Centre) or Sue Ryder, St Johns Hospice, may be sent c/o Easton and Cook Independent Funeral Service, 2b Harding Way, St Ives, Cambs PE27 3WR.

A Message from the Chair, Cllr Richard Allen.

It is with great sadness that I report the passing of Derek Clifton.The Parish Council and I would therefore like to offer our sincere condolences to Derek's wife Cynthia and his family for their loss.Derek's commitment and dedication to Hemingford Grey was unquestionable. His 53 years as a Parish Councillor (including 12 as its Chairman) is probably unparalleled in the UK. But Derek also worked tirelessly in helping to support the Regatta, the Pavilion, and many of the other activities and events that now form the bedrock of the village calendar. What is more, Derek was always there when the village needed his help, such as during the floods of 1998 and 2003. His loss will be felt by many and our village owes him a huge debt of gratitude for everything that he did and achieved during his lifetime. Thank you Derek and God bless.

This recording was made by John Jenkin back in March 2010 originally for an article in the Hemingford Grey Parish Plan. Now, we are able to share this recording on our website for all to enjoy.

Derek Clifton was born and grew up in the village of Hemingford Grey. He went to school in Hemingford and St Ives and has lived and worked here all his life. Derek has also served on the Parish Council for more than 50 years (including 12 years as Chairman) and has worked tirelessly in helping to support all sorts of activities and events that are now common place in the village today, particularly the annual Regatta where he was instrumental in helping to revive the event after a break during the war years (1939-1945). This is a fascinating first-hand account of life in a bygone age from someone who holds dear those values that make for a strong and happy community.

John Jenkin, originally born in Manchester, has lived in Hemingford Grey for twenty four years. He served on the Parish Council with Derek during which time he Convened the Hemingford Grey Parish Plan Steering Committee. He has also served as a Trustee of the Hemingford Peace Memorial for a number of years and is actively involved in many village activities 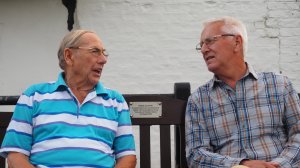 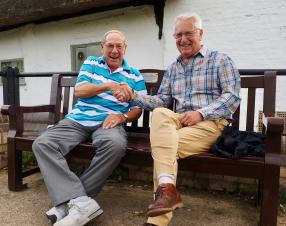 Don Beadle will be remembered with great affection by the many villagers who attended Hemingford Grey Primary School whilst he was headmaster there for sixteen years, from 1974 to 1990. He also served on the Parish Council, including three years as Chairman, during which time Hemingford Grey won the County 'Best Kept Village' competition (the seat outside the Reading Room celebrates this achievement and has Don's name recorded there as the Chairman at the time). Don continued to live in the village with his wife after he retired and maintained a keen interest in the local football teams and the Bowls Club, playing in the local leagues for the latter. He was also a patron of the Regatta and served as President and a race judge for many years.

This recording was made by John Jenkin some years ago after Don retired and is an informal interview in which Don recalls his personal experience (prompted occasionally by his wife, Diana) of taking up his post at the village school and what being part of this community meant to him.

Don passed away at home in Hemingford Grey on the 6th November 2017 aged 90 years. 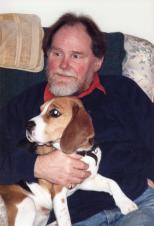 Don at home with his dog.

This recording marks the 100th Remembrance Sunday Service held at St James's Parish Church on the 11th of November 2018. This is a complete recording in two parts, although two of the hymns have been foreshortened for reasons of space. Part 1 consists of the service in St James itself and Part 2 ends with the Act of Remembrance at Pound Road Cemetery. Recording conditions were not ideal at the time, so apologies in advance for the poor sound quality in places, but hopefully there is enough here to give a sense of the occasion.

The service was conducted by the Reverend Peter Cunliffe with an address by Allen Foster and other members of the Parish contributing to the readings and prayers. A copy of the full service can be found in the PDF document that accompanies this recording which also contains the names of the Fallen and a list of Commonwealth War Graves. 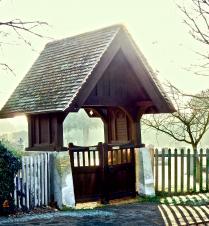 A demonstration run of a Rolls Royce Merlin Engine mounted on a trailer which was part of this years (2018) Quest Brothers Classic Cars display at The Pavilion.

This video, filmed by by John Jenkin, is a record of how flooding in 1998 affected Hemingford Grey and the surrounding area. The new flood defences were completed in 2007 at a cost of £9.3 million. 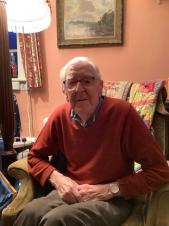 Hemingford Grey resident, Dr John Walshe, will be celebrating his 100th birthday on 24th April. He was born in Kensington, London, to Sir Francis Walshe who was an internationally distinguished neurologist, and followed in his father's footsteps with a distinguished medical career of his own. To mark this event, Esther Harrod recently talked to John about his lifetime work and family background with some pictures of John to accompany. You can read the full article by clicking on the link below. Happy Birthday Dr Walshe.