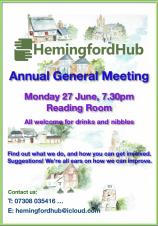 The HemingfordHub will be holding their AGM 2022 on Monday 27th June, 7.30pm in the Reading Room, High Street, Hemingford Grey.

All welcome for drinks and nibbles. Find out what we do and how you can get involved. We are all ears on how we can improve and welcome suggestions, please! 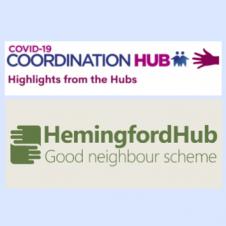 The Hemingford Hub has more than 140 volunteers helping in excess of 260 residents across the villages of Hemingford Grey and Hemingford Abbots.

The hub would like to recognise three very active volunteers for their dedication:

Camille Altman (or Cammy), collects and delivers prescriptions. She has been shopping for nine households and picking up over 150... Read More » 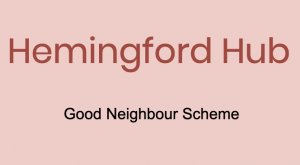 In these challenging times, never has it been more important to support our community. The Hemingford Hub Good Neighbour scheme is run by local people for residents in the Hemingfords, especially the elderly and house-bound. We can collect and deliver essential groceries and medicines.

When things have calmed down, we can help with the little tasks that once were so easy, but now are too difficult.... Read More »

The newly-formed Hemingford Hub is moving towards creating a 'dementia friendly' village. The Memory Lane and Friendship group is a singing and reminiscing initiative for Hemingford's residents suffering from dementia, the elderly or anyone who would simply like to get out of their house for a little company once a month.

The group will start each session with some communal singing of popular songs... Read More »

A new initiative to build a stronger community in the Hemingfords has hit its befriending scheme target after just a few days.

Hemingford Hub's Good Neighbour scheme had hoped to attract 20 helpers by the end of the year, but 16 signed up at the launch meeting in Hemingford Grey's Reading Room, and another nine have offered to help since.

"The response from both villages has been tremendous," said chairman... Read More » 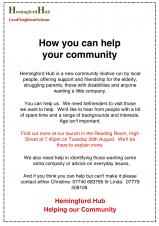 How you can help your community

Hemingford Hub is a new community iniative run by local people, offering support and friendship for the elderly, struggling parents, those with disabilities and anyone wanting a little company.
You can help us. We need befrienders to visit those wew ant to help. We'd like to hear from people with a bit of spare time and a range of backgrounds and interests. Age isn't important.... Read More »

Have your say on the Draft Bus Strategy - The Combined Authority would like to thank those of you who have already completed our bus strategy survey. We are very grateful to eve… hemingfordgreyparishco…