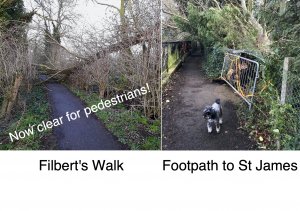 Following storm Ciara there have been numerous incidents of falling trees obstructing roads and footpaths and other wind damage around the village, most of which now appears to have been cleared.

The tree blocking Filbert's Walk has been reported to CCC but has in the meantime been cleared for pedestrian use.

While the footpath to St James remains open, a very large tree has fallen and is now overhanging a long section of the pathway (which has also pinned open the floodgate) and walkers should exercise care and expect disruption when work to clear the branches starts.